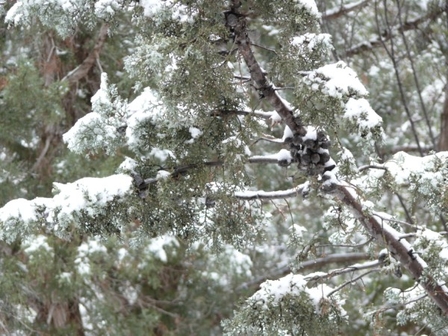 Snow and ice traditionally cover many northern Winter landscapes; many plants survive these harsh Winter conditions and produce new growth in the Spring.

Winter is the hardest season for a plant’s survival; plants need water to live and in Winter the soil is often frozen with ice and snow, trapping any water within it. The plant can not replace any water losses and as a result, the plant will die. Therefore, plants and trees have adapted various ways in which to survive the Winter.

Which Plants Survive the Winter?

Deciduous and Evergreen Trees in Winter

Deciduous trees effectively become dormant throughout the Winter months; deciduous trees drop their leaves in the Fall and as a result do not need to photosynthesize and need little water. The tree has received enough nutrients through photosynthesis in the Spring and Summer months to maintain it throughout the Winter, once its leaves have fallen.

Evergreen plants or coniferous trees, such as the traditional Christmas Fir, do not lose their leaves in Winter. The needles of evergreen trees hold little water; the needles primarily contain sugars, alkaloids and non-freezing essential oils. The needles of the evergreen tree evolved from leaves to minimize water loss and ensure the tree’s survival throughout the Winter. Evergreens are slow to photosynthesize and can maintain functions in lower temperatures than other plants.

Snow is vital to the Winter survival of plants and trees as snow acts as an insulator and protects the plant from harsh, Winter conditions. Snow flakes have a unique structure; snow flakes have small intervening spaces within their structure which are filled with air. This means there is low heat conductivity; as a result, the daily temperature penetration into the snow is minimal and plants are protected from frost and freezing conditions. Once the snow melts, the moisture is also good for the plants.

The Effect of Changing Snowfalls on Plants

In some areas of the world snowfall is reducing; in other areas of the world snowfall is occurring earlier in the season than it has traditionally occurred. A 2007 UNEP report Global Outlook for Snow and Ice stated that in the Northern Hemisphere snowfall had reduced by seven to ten per cent over the last 40 years for the months of March and April. Throughout the Northern Hemisphere, the period of the year when there is no snow cover has also lengthened.

If snowfalls occur early in the Winter season, or even at the end of Fall, some plants may traditionally be unprepared for the sudden climate change which may result in the plant dying; however, should snowfall be later or lighter in the traditional Winter months, plants may struggle to survive too. If high alpine and mountainous areas experience less snow, the traditional plant species found in these areas may eventually alter or die out completely.

Our 10 year anniversary, thank you for 10 great years!