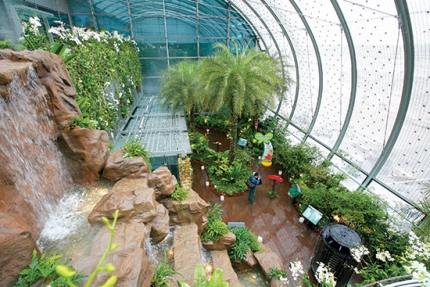 Sky is the limit!

An increasing number of airports are investing in vertical gardens and living walls to create a unique setting, make themselves more environmentally friendly and, even grow their own food, writes Robin Stone.

It could be a scene from The Lost World. Octopus trees from Papau New Guinea compete for light and space with staghorn ferns from Indonesia, while lacy-tree philodendrons from Brazil spread out their branches to form an exotic jungle canopy overhead.

But these extraordinary species are no figment of Sir Arthur Conan Doyle’s fevered imagination. In fact, they’re very much alive and well at…Edmonton International Airport.

The Canadian gateway says that its ‘living wall’ gives passengers a breath of fresh air as they move around the terminal, because the vegetation is responsible for substantially improving air quality.

The design of the wall at Edmonton International (EIA) lets its shape evolve more three-dimensionally, with the larger species being allowed to grow up to 10 feet out of the wall.

As aviation worldwide continues to face pressure from the environmental lobby, EIA is just one of a number of green-fingered airports fighting back by doing a bit of gardening in the terminals.

Portland International Airport’s vertical garden has added a welcome splash of colour to the exterior of a drab grey multi-storey car park. The garden is just one of a number of green initiatives at Portland; a solar panel-clad glass canopy producing 12,000 kilowatt-hours of energy per year covers the approach road.

Vertical gardens, sometimes known as ‘living walls’, are sprouting up all over the world – and proving a big hit with passengers passing through the terminals.

Latest to jump on the horticultural bandwagon is Paris CDG, where an extraordinary wall garden – looking more like a vast painting at first glance – has been created in the newly-opened international concourse. Standing 10ft high and stretching out 30ft, the garden contains a wide variety of living plants.

Vertical gardens are the brainchild of French botanist Patrick Blanc, who quite literally turned horticulture on its head with his environmental vision. Traditional gardens, he argued, consume acreage – so when valuable space is limited, why not reach for the sky instead?

The evolving science of hydroponics, and in particular hydroculture – the growing of plants on artificial surfaces or in fertile liquids – has spurred the development of rooftop gardens, rooftop agriculture and, most recently, ‘wall gardening’.

Three vertical garden systems dominate the market. The oldest and most famous is Blanc’s mur végétal (vegetation wall). Since then, competitors have arrived in the shape of the Dutch WonderWall and the Parabienta Green Wall, developed jointly in Japan and Singapore.

Blanc’s system consists of a steel frame screwed into the wall on which are mounted layers of PVC and non-corrosive, absorbent felt. Blanc’s plants are placed in snug pockets cut out into the felt tapestry and aesthetically arranged. Irrigation is fully automated.

Singapore’s Changi has chosen the Parabienta Green Wall system, a mosaic of square modules anchored to the wall. Each square consists of a spongy irrigating tissue, which keeps the plants watered around the clock.  It’s a far cry from Changi’s early efforts at landscaping back in the 1980s, which started by scattering potted plants throughout the terminals for decoration. Orchid and cactus gardens were introduced later, followed by themed gardens with seasonal displays to celebrate major festivals.

“In constructing T3, our newest terminal, landscaping was no longer an afterthought, but an integral part of the design to define the unique architecture of the building,” says Khaja Nazimuddeen, senior manager, airport opperations, Changi Airport Group.  Changi’s Green Wall is made up of 20 different species of 25,000 climbing plants and four cascading waterfalls. The ‘vertical landscape’ design, which hangs above the baggage reclaim areas to maximise planting space, covers almost 4,500 square metres, making it one of the largest indoor vertical gardens in Singapore.

Although vertical gardens may be pleasing on the eye, they offer a host of other benefits. Chicago O’Hare, which opened the first in-airport vertical garden in 2011, grows a range of vegetables and herbs which are harvested and sold in the airport’s restaurants – offering passengers the freshest of fresh food.  O’Hare’s ‘urban garden’ is sited on Concourse G in Terminal 3. The harvest includes chard, basil, dill, parsley, chives, lettuce, peppers, thyme, oregano and green beans. They are cultivated using aeroponics, a method of growing plants without soil by using a water and mineral nutrient solution.

Seedlings are started in small cubes made from natural volcanic ash. When the plants mature, they are transplanted to tall, circular towers and irrigated using constantly recycled water.  “The water has nutrients in it that feed the vegetables, which – because they are growing vertically instead of horizontally – uses less land,” says Chicago Department of Aviation commissioner, Rosemarie Andolino.   “Well-known Chicago restaurants inside the terminal use fresh, locally grown produce every day in meals prepared for passengers,” enthuses Andolino.

“Producing locally grown foods supports our commitment to sustainability by strengthening the local economy, while reducing urban sprawl, traffic congestion, habitat loss and pollution from transportation of produce.”  Reduced heat loss and improved air quality are just two of the benefits of a low-maintenance ‘living wall’ according to Vancouver International Airport.  Research by Cambridge University found that living walls and green roofs cut the wind chill factor by 75% and heating demand by 25%. The plants can save thousands of dollars by reducing heating and cooling costs, as well as reducing carbon dioxide.

Vancouver’s green wall stands 17 metres high and is home to over 27,000 individual plants selected for their long-term performance.

With public perception in mind, biowalls have to look attractive all the time. Sydney Airport is particularly proud of its 98ft vertical garden, a stunning feature of the Qantas First Class lounge. But all 8,500 plants need to be pruned and maintained so they don’t get out of control and turn into an airport forest.  Sydney’s green wall was another creation of Patrick Blanc, who worked with a company called Greenwall to integrate the wall into the rest of the lounge.   “The garden is very efficient and helps lower energy consumption, both in winter by protecting the building from the cold and in summer by providing a natural cooling system,” explains Blanc.

The lounge itself was designed by Greenwall founder, Mark Paul. By using plants that can grow in soilless terrain – such as orchids – walls can be created to thrive in their own micro-climate. “It creates a resilient root system,” says Paul.   “Plants need light, water and food. Give them those three things, and they will grow anywhere.” The gardens can be irrigated with a trickle system which allows the water that falls to the bottom to be pumped back to the top for recycling.  And while a vertical garden can be a maintenance headache – with water pumps and light levels requiring constant monitoring – a well-designed ‘wall garden’ will last for 10 years.

They’re not restricted to airports. A shopping centre near Milan recently opened the biggest vertical garden in the world covering 1,263 square metres and containing a staggering 44,000 plants.

With vertical gardens quite literally growing in popularity, who’s to say that Milan’s record-breaking marvel won’t one day be surpassed by an air terminal? Onwards and upwards, for vertical gardens, the sky’s the limit.

***Check out our New Commercial***