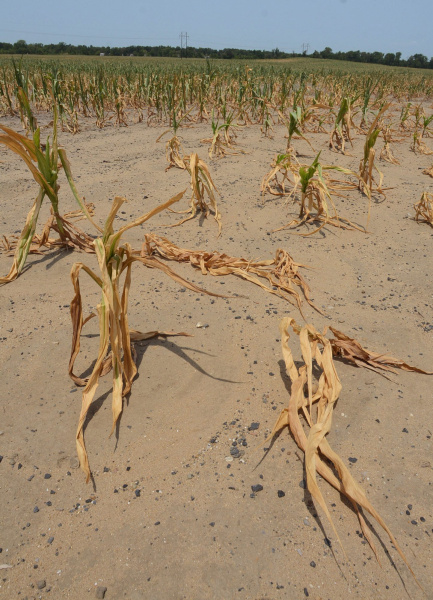 As drought grips 80% of the country, the devastation to corn and other breadbasket crops this year could surpass last year’s record claims for weather-related crop losses.

No one knows how the farm’s soybean crop will fare. Laird feels lucky to have crop insurance.

“We’ll survive for this year. Next year, we don’t know. A lot of farmers with cattle, the ponds are running dry and they’re in trouble,” he said.

The drought gripping the Midwest and about 80% of the country is the most widespread since 1956, stoking massive wildfires and decimating the nation’s breadbasket crops, according to a report released Monday by the National Drought Mitigation Center. Drought conditions led the Department of Agriculture recently to declare natural disasters in more than 1,000 counties in 26 states.

This year’s losses could surpass that “easily, given that the drought is developing in corn-growing regions” including Illinois and Indiana, he said.

Because Midwestern farmers rely more on rain than irrigation compared with counterparts in California, the drought hurt them more, said Nathan Fields, director of biotechnology and economic analysis at the St. Louis-based National Corn Growers Assn.

Fields said the drought was not expected to be catastrophic, but it would be far-reaching. For instance, corn-based ethanol producers have already reduced their output, and livestock breeders are expected to use less corn-based feed. “Will that mean massive [numbers of] people leaving from corn farming? Probably not,” he said. “The other markets will have to rebound slowly from the reduced use of corn.”

For the cattle industry, already facing localized water shortages from the drought, that means buying less feed or moving cattle to greener pastures, said Michael Miller, senior vice president of global research for Denver-based National Cattlemen’s Beef Assn. Ranchers are facing a 5% to 10% cost increase because of the drought, he said.

Poultry and pork industries face similar rising corn feed costs, he said, adding that all three industries would probably pass those expenses on to consumers.

This was supposed to be a banner year for the U.S. corn crop, the largest in the world. The USDA reported this year that farmers had planted 96.4 million acres, 5% more than last year, in anticipation of increased demand from China and other developing countries — the most since 1937, when the nation was emerging from the Depression.

Then the drought combined with triple-digit temperatures and the corn crop began to fail this summer. In its most recent assessment released Monday, the USDA reported that 31% of corn crops nationally were in good or excellent condition, a drop from 40% a week earlier.

“The problem is most of the drought now is sort of spread into the north Plains, up into the Midwest hitting the corn belt, and you’ve got the heat impacting the corn crop,” said David Miskus, a meteorologist specializing in drought monitoring and prediction at the National Weather Service Climate Prediction Center.

“It’s a critical time for the corn, pollination, so if it gets above 90 degrees for an extended period of time, the corn essentially bakes. The ears won’t fill,” Miskus said.

Southern states and the Texas coast have been soaked by tropical storms recently, with southeastern California and other parts of the Southwest moistened by seasonal monsoons. Dry areas of Colorado, New Mexico and Wyoming that have been plagued by wildfires this summer may be helped by rain from coming storms, but lightning could also spark new fires, Miskus said.

“It doesn’t so much bring relief — it will prevent it from getting any worse,” he said.

Miskus, who will assemble the weekly U.S. Drought Monitor report being released Thursday, said no major storms were forecast to bring rain to the parched Midwest in coming days. As the drought persists, he said, it may begin to endanger local water supplies, lowering lake and river levels. El Niño may bring showers, but not until the fall, and mainly in the South, he said.

“Even if the rains came now, it might be too late for the corn. It’s at a make-or-break stage now,” he said.

As of last week, corn and soybean crops were suffering drought conditions not seen since the devastating drought of 1988, said Brad Rippey, an agricultural meteorologist with the USDA. Unlike last year’s drought, which was regionalized, mainly hurting Texas cattle and forestry industries, he said this year’s has spread “into the heartland, the agricultural center of the country.”

“We are in our worst drought in a generation,” Rippey said, particularly for corn. “What we don’t know is how much failed to pollinate.”

When Illinois Gov. Pat Quinn toured the Laird farm Monday, he promised state assistance to farmers while calling on USDA officials to grant federal disaster relief to seven additional Illinois counties decimated by the drought, bringing the state total to 33.

“Agriculture is the backbone of Illinois’ economy, and as we’ve seen today, severe drought conditions are devastating crop production throughout the state,” Quinn said.

Laird didn’t think the government assistance would help. Even low-cost state loans will have to be repaid, and if nature doesn’t let up, farmers won’t be able to make good, he said.

“It’s dependent on the weather,” Laird said. “There’s not much they can do.”

Urban Plantscapes take:  It is time we stop being so dependent on mothers nature, with this extreme weather becoming more and more common place.  We must set up irrigation to all crops.  This can easily be done and be done off of harvesting rain water to not further impact the area that is already subjected to drought conditions. It is 2012 we simply cannot 100 percent relate on mother nature for our food, its too unreliable.