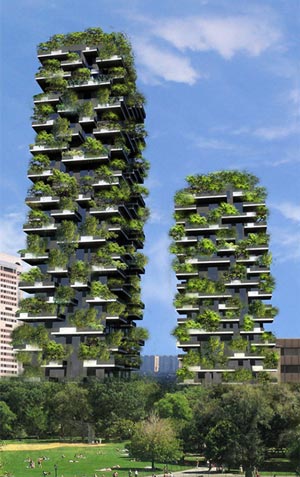 Sustainable architects will be able to breathe a sigh of relief with the news that the world’s first garden tower is now actually under construction. A rarity for conceptual ideas in the sustainable building community, but this incredibly innovative, yet subtle concept is leaping off the page with such ferocity that it is gaining industry and public interest alike.

These incredible garden structured apartment towers are the brain child of Italian architect Stefano Boeri and have been named the ‘Bosco Verticale’ or the ‘Vertical Forest’.

Boeri cites a “regeneration of the environment and biodiversity” as his key ideology, showing a passion and flair for the naturalisation of the built environment. The catalyst for an eco tower or vertical forest is a willingness to create environments that are neither inside nor out, but engage in a communal space seamlessly. This idea has been so well communicated through Bosco Vertical, that one is almost unable to differentiate between the buildings built and natural form.

In terms of actual sustainable aspects, both the 110 and 76 metre buildings will include in their structures 900 trees, ranging in heights from three to nine metres tall. In addition to these, further natural flora and fauna will be built into the exterior of the buildings’ balcony areas, creating a tree space that would amount to 10,000sqm of forest area.

Not only will this tower duo save energy, but they will actually produce it. Aeolian and photovoltaic power has been introduced to compliment the buildings’ natural carbon dioxide filtering system (we often forget these are also known as trees), acoustic insulators, and greywater irrigation system in order to create living buildings that offer to leave as small a carbon footprint as possible.

Located in the centre of Milan, on the edge of the Isola neighbourhood, the two towers are but the first stage of Boeri’s BioMilano, which will involve the redevelopment of up to 60 abandoned farms in the area to be used in a sustainable community sense.

This concept is not new. In fact, it’s not even surprising. Concepts of this nature, such as Edouard François’  ‘FlowerTower’ and more refined ‘Tour Vegetale De Nantes’ are original concepts that share this green ideology and inbuilt tree structured component. Constructing it, however, is. Here at Designbuild Source we’ve covered a vast range of sustainable building concepts – only to see them remain as such, concepts. Which makes it all the more refreshing to discover that such an incredible design is finally becoming a reality.

A simple idea really. This complex offers no highly advanced green technologies, just an incredibly innovative imagination and the gumption to back it up.

Largest Green Wall in North America to be Unveiled Tomorrow!