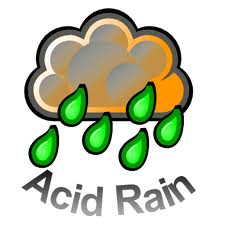 The Truth about acid rain on local plants and wildlife.

Almost everybody has heard about acid rain and knows that it is something bad. But what exactly is it? What are its effects on plants, animals, human beings, and what can be done to solve this problem?

The term acid rain does not convey the true nature of the problem and therefore scientists use the term “acid depositions”. This is because the acid which has formed due to pollution may return to the earth as a solid or a gas and not just as rain. Depending upon the climatic conditions it could also come down as rain, fog, or snow, and in the wet form it is known as “acid precipitation”.

Certain industries, as well as emissions from vehicles give rise to increase of sulphur dioxide and nitrogen oxides in the air. These emissions change into sulphates and nitrates under the influence of sunlight and moisture, and get converted into sulphuric acid and nitric acid, which come down as acid rain.

Coal generally contains between 2 – 3 % sulphur, and when it is burned, this sulphur is released into the atmosphere. Electric companies and other industries which burn coal cause a lot of emission of sulphur dioxide. Other industries which process raw ore containing sulphides in order to obtain copper, zinc, or nickel also cause an increase in sulphur dioxide levels in the atmosphere.

The major source of emissions of nitrogen oxides into the air, is from vehicles and other places where fossil fuels are burned. Forest fires, often caused by man, either deliberately or accidentally, are another source of pollution.

Naturally occurring phenomena like volcanic activity, lightning, or organic decay, also gives rise to an increase in atmospheric pollutants but not much can be done about these causes. However over 90% of sulphur dioxide emissions and around 95% of nitrogen oxides released into the air are from man made sources.

The problem of acid rain is not new. It was first noticed during the 17th. century, when people observed the effects of industrialization on plants and animals. As far back as in 1872, the Scottish chemist, Angus Robert Smith wrote a book “Air and Rain: The Beginnings of Chemical Climatology”, in which he used the term “Acid Rain”, and the name has stuck. The problem has become severe since the 1960s when fishermen noticed a sharp reduction in the quantity of fish in lakes of North America and Europe.

The havoc done by acid rain is not localized in the place where it is caused. The atmospheric emissions may travel for several days and over long distances depending upon wind and climatic conditions, before coming down as acid rain. The problem caused in an industrialised area may therefore result in acid rain in the surrounding forests or lakes, or even further away. It is believed that around 50% of the acid rain that occurs in Canada is due to pollution caused in the United States of America, and the effect of polluting industries in England can be felt in Norway.

If there were no pollution, the rain would still be acidic. Natural rainfall has a pH of around 6.0. This is because of the effect of Carbon dioxide in the air which combines with water to form carbonic acid. The effect of this is however negligible, as it is neutralized in the soil by alkaline material like limestone. However the other emissions cause the pH of the rain water to drop below 5.5 and at this level it is considered to be acid rain. The soil cannot now neutralise the acidity of the rain water. In some places the acidification is so severe that the pH drops to around 4.0. Rare cases have been reported of acid rain having pH of around 2 – 2.5.

Both natural vegetation and crops are affected by acid rain. The roots are damaged by acidic rainfall, causing the growth of the plant to be stunted, or even in its death. Nutrients present in the soil, are destroyed by the acidity. Useful micro organisms which release nutrients from decaying organic matter, into the soil are killed off, resulting in less nutrients being available for the plants. The acid rain, falling on the plants damages the waxy layer on the leaves and makes the plant vulnerable to diseases. The cumulative effect means that even if the plant survives it will be very weak and unable to survive climatic conditions like strong winds, heavy rainfall, or a short dry period. Plant germination and reproduction is also inhibited by the effects of acid rain.

The action of acid rain causes harmful elements like mercury and aluminum to be leached from the soil and rocks and it is then carried into the lakes where aquatic life may be affected. Warning signs have been posted at several lakes, telling about the dangers of eating fish which may have been poisoned by mercury. Just as the soil has a natural ability to neutralize the acidity of rain water, within a certain limit, so also lakes and other water bodies can to a certain extent nullify the effects of acid rain. However as the acidity increases, the natural mechanisms are no longer able to cope. As the water gets more acidic its pH goes down. As the pH reaches 5.5, plankton, certain insects and crustaceans begin to die. At a pH of around 5.0, the fish population begin to die. When the pH drops below 5.0, all the fish have died, and the bottom of the lake lies covered with undecayed material. Every year during the spring thaw, there is a sudden increase in the acidity of the lakes as frozen acid is suddenly deposited in them. This “Acid Shock” prevents the reproduction of aquatic species, or results in the deaths of the hatchlings.

Effects on animals and birds.

Mankind depends upon plants and animals for food. Due to acid rain the entire fish stocks in certain lakes have been wiped out. The economic livelihood of people who depended on fish and other aquatic life suffers as a result. Eating fish which may have been contaminated by mercury can cause serious health problems. In addition to loss of plant and animal life as food sources, acid rain gets into the food we eat, the water we drink, as well as the air we breathe. Due to this asthmatic people and children are directly affected. Urban drinking water supplies are generally treated to neutralise some of the effects of acid rain and therefore city dwellers may not directly suffer due to acidified drinking water. But out in the rural areas, those depending upon lakes, rivers, and wells will feel the effects of acid rain on their health. The acidic water moving through pipes causes harmful elements like lead and copper to be leached into the water. Aluminium which dissolves more easily in acid rain as compared to pure rainfall, has been linked to Alzheimer’s disease. The treatment of urban water supplies may not include removal of elements like Aluminium, and so is a serious problem in cities too.

All living things, whether plants or animals, whether living on land or in the water or trees, are affected either directly or indirectly by acid rain. Even buildings, bridges and other structures are affected. In cities, paint from buildings have peeled off and colours of cars have faded due to the effects of acid rain. From the Taj Mahal in India to the Washington Monument great buildings all over the world have been affected by the acid rainfall which causes corrosion, fracturing, and discoloration in the structures. In Europe, structures like The Acropolis in Greece and Renaissance buildings in Italy, as well as several churches and cathedrals have suffered visible damage. In the Yucatan peninsula in Mexico, and in places in South America, ancient Mayan Pyramids are being destroyed by the acid rain. Temples, murals, and ancient inscriptions which had previously survived for centuries are now showing severe signs of corrosion. Even books, manuscripts, paintings, and sculpture are being affected in museums and libraries, where the ventilation system cannot eliminate the acid particles from the air which circulates in the building. In some parts of Poland, trains are required to run slowly, as the tracks are badly damaged due to corrosion caused by acid rainfall.

The bottom line is that all things on earth are being affected by this problem and the good news is that something is being done to solve it. Pressure from the environmental groups, and public has increased as the effects of the havoc caused by acid rain become more apparent. Governments all over the world have drawn up plans to tackle this problem.

Lakes that have become highly acidic, can be treated by adding large quantities of alkaline substances like quicklime, in a process called liming. Although it has worked in several places, it has not been successful where the lake is very large, making this procedure economically unfeasible, or in other lakes where the flushing rate of the lake waters is too large resulting in the lake becoming acidic again.

The best approach seems to be in prevention. To this end environmental regulations have been enacted to limit the quantity of emissions released in the atmosphere. Several industries have added scrubbers to their smoke stacks to reduce the amount of sulphur dioxide dumped in the atmosphere. Specially designed catalytic converters are used to ensure that the gases coming out from exhaust pipes of automobiles, are rendered harmless. Several industries which use coal as fuel have begun to wash the coal before using it thereby reducing the amount of Sulphur present in it, and consequently the amount of emissions. Usage of coal with a low Sulphur content also reduces the problem.

We as individuals can take several steps to alleviate the effects of this problem. A reduction in use of vehicles will reduce the amount of emission caused by our vehicles. So do not use the car unless it is absolutely required. For going short distances, walk or try to use a bicycle. This will not only protect the environment but also improve your health. If the distance is greater, try using public transportation. If you must use your vehicle try forming a car pool and share your vehicle with someone else. Ensure that your vehicle is properly tuned, and fitted with a catalytic converter, to reduce the emissions.

Speak to others about this problem. Increasing awareness is one way of ensuring that things are done to solve this global problem. Find out what fuel is being used by your electricity company to produce electricity. If they use coal, ask what methods they use to contain, if not eliminate, the problem of sulphur emissions. Washing the coal used, or using coal having a low sulphur content, is costly and therefore some companies try to avoid this. If you have the option, switch to a utility that shows more concern for the environment.

Write to your representative in Government. Pressure from people can make Governments enact suitable legislation, to ensure that industries keep their emissions within limits. Join some group which works to protect the environment. When people get together and speak with one voice they are more likely to be heard.