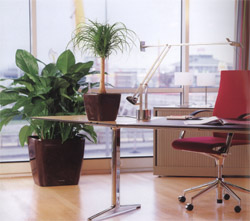 ScienceDaily (June 24, 2011) — Formaldehyde is a major contaminant of indoor air, originating from particle board, carpet, window coverings, paper products, tobacco smoke, and other sources. Indoor volatile organic compounds (VOCs) such as formaldehyde can contribute to allergies, asthma, headaches, and a condition known as ”sick building syndrome.” The concern is widespread; a 2002 report from the World Health Organization estimated that undesirable indoor volatiles represent a serious health problem that is responsible for more than 1.6 million deaths per year and 2.7% of the global burden of disease.

Scientists have long known the benefits of using plants to absorb and metabolize gaseous formaldehyde. Phytoremediation — the use of green plants to remove pollutants or render them harmless — is seen as a potentially viable and environmentally significant means of improving the indoor air quality in homes and offices. A team of scientists from Korean’s Rural Development Administration and the Department of Horticulture at the University of Georgia tested the efficiency of volatile formaldehyde removal in 86 species of plants representing five general classes (ferns, woody foliage plants, herbaceous foliage plants, Korean native plants, and herbs). The results of the extensive research were published in HortScience.

“Based on the wide range of formaldehyde removal efficiency among the plants tested, we separated the species into three general groups: excellent, intermediate, and poor,” said corresponding author Kwang Jin Kim. “The species classified as excellent are considered desirable for use in homes and offices where the formaldehyde concentration in the air is a concern. It is evident from our results that certain species have the potential to improve interior environments and, in so doing, the health and well-being of the inhabitants.”
Email or share this story:
| More

The above story is reprinted (with editorial adaptations by ScienceDaily staff) from materials provided by American Society for Horticultural Science, via EurekAlert!, a service of AAAS.

How to build a green roof