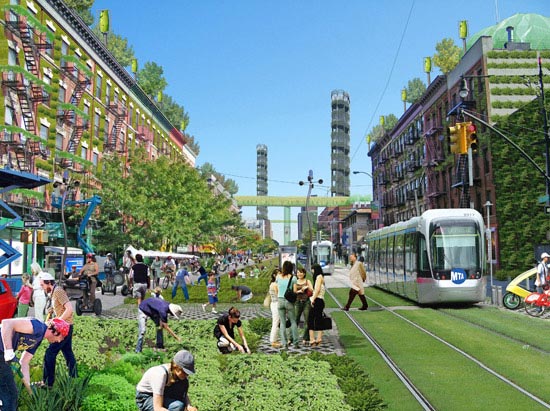 New York is known in the green building community for its fast response to, and incorporation of, green technologies and initiatives.

In addition to the growing trend of LEED buildings city-wide, the Highline development and various other green roofing projects are making use of the limited space available in the dense metropolis.

Terreform Inc. is offering a glimpse into what could be the New York of tomorrow with their New York City Steady State (NYCSS) sustainability plan. In the plan, the developers summarise their mission for greening up  New York in its entirety.

“New York City (Steady) State is an alternative plan for New York City based on a single predicate: it is possible for the city to become entirely self-sufficient within its political boundaries,” say Terreform Inc. “At its conclusion, our project will have proven this and outlined the necessary steps to achieve it.”

Due to the holistic nature of both sustainability and this project, the different areas for sustainable focus are extensive, including food, energy, water, waste, movement, buildings, air and climate.

From early renderings of the proposed development, the change to the New York city aesthetic is extreme. Due to the fact that a key element of the high-impact changes will revolve around urban farming, the image of New York’s future is certainly green.

Urban farms will line major public areas such as the Brooklyn Bridge and Times Square with farming skyscrapers fitting into the original surroundings to cater to the food demands for the 8 million city-siders. All of the extensive rooftop space is envisioned as being covered in green, with the already popular green roofing process exploding throughout the city and creating an environmental utopia/urban jungle fusion that has never before been imagined.

Train lines are to be covered in natural growth, with the inclusion of farming areas spread throughout what was once a concrete-dominated city.

Solar panels will run through Times Square in a shade-like fashion, catering to the bright lights of the area.

The most noticeable detail about the plan, as seen through the various before-and-after renderings, is that while the changes are extreme, they seem very achievable. While many in this industry will write the major plan off as a ‘pie in the sky’ ideal, if there is one place in the world that such an endeavour would take off, it is New York. A complete city retrofit may be closer than anyone expected.