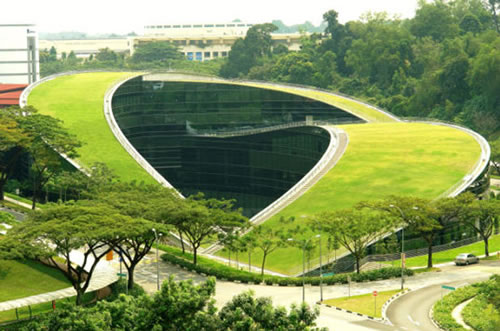 Bob Donaldson/Post-Gazette
The South Terrace green roof on the David L. Lawrence Convention Center. It retains up to 80 percent of stormwater and keeps the roof 50 degrees cooler on hot days.
By Mark Belko / Pittsburgh Post-Gazette

Nine years after its opening, the David L. Lawrence Convention Center has become the first such facility in the world to earn a platinum certification for operations and maintenance under the U.S. Green Building Council’s Leadership in Energy and Environmental Design rating system.

“You are a shining example of what a meeting and event facility can be about,” said Kimberly Lewis, a U.S. Green Building Council senior vice president who made the announcement during a ribbon cutting Thursday for the convention center’s new green roof.

Platinum is the highest level of certification awarded by the council. The convention center is the first to earn it under the council’s rating system for existing buildings.

Mayor Luke Ravenstahl, a Democrat, said the achievement not only gives the convention center some bragging rights, but literally helps to bring in another kind of green. Since 2006, groups seeking green convention centers and green communities have spent $176 million in the region, he said.

“This isn’t just a plaque. This isn’t just recognition. These are real dollars being spent in our hotels, in our restaurants and, of course, here at the convention center,” he said.

Last year, $32 million of the $112 million in tourism spending that the convention center was responsible for was due to its green features or reputation, county Executive Rich Fitzgerald, a Democrat, added.

“People make convention decisions based on green,” he said.

The LEED certification for existing buildings measures a host of areas, including building operations, cleaning and maintenance, recycling programs, landscaping and other exterior maintenance, and systems upgrades.

Toward that end, the Pittsburgh convention center uses 29 percent less energy than comparable entertainment venues, while keeping 56 percent of the waste generated by events out of landfills through recycling and other initiatives, Ms. Lewis said.

In addition, less than one third of the building’s water comes from municipal taps. The center uses an on-site wastewater treatment plant to recycle water and also draws from an underground water source to meet its needs.

The platinum certification was announced in conjunction with the christening of the center’s green roof, located on the third floor south terrace. The 20,000-square-foot space features flowers, plants and grasses, and is designed to retain 80 percent of rainfall from storms and reduce the roof temperature by 50 degrees even on the warmest days. It can be used by visitors or for special events.