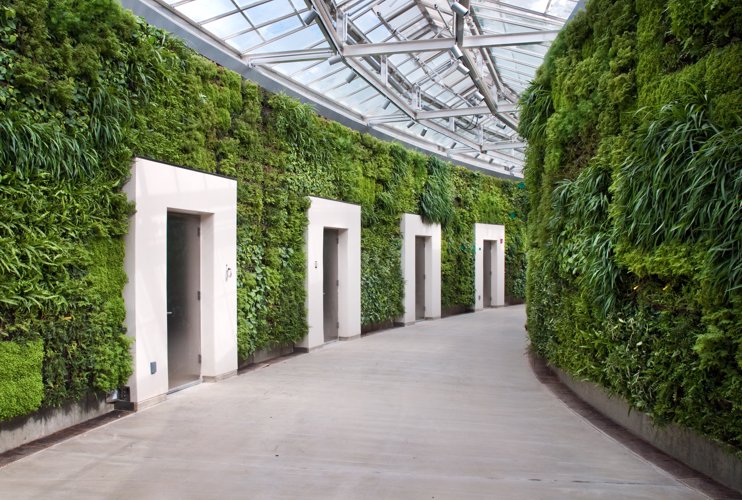 The living wall at Two Snowhill

The largest ‘living wall’ in Europe has been unveiled in Birmingham – garlanded with over 600 square metres of plants.

The 220 metre long wall forms an eye-catching feature of Two Snowhill – the latest addition to Birmingham’s skyline and the largest office development underway outside London.

The wall, which stands seven metres high and includes a total of 604 square metres of plants, is believed to be the biggest of its kind anywhere in Europe. It has been unveiled to coincide with the official launch of Two Snowhill this week.

Work to create the giant wall started early last year with the construction of the steel frame along the Metro viaduct wall next to Snowhill Station. This was followed by the installation of the panels containing the thousands of plants.

The plants were pre-grown in purpose-built panels in a nursery in Holland and delivered to site ready to be attached to the made-to-measure framework.

As well as plants, the living wall incorporates decorative perforated aluminium panels, which have been designed to capture artificial and natural daylight. Programmable uplighters bring the wall to life at night and create constantly changing patterns and the illusion of depth and movement.

Carly Kingswell, landscape architect at Hyland Edgar Driver, which installed the living wall, said: “Living walls have been growing in popularity over a number of years, although one on the scale of Two Snowhill’s is rarely seen.

“The technology is relatively young, but this particular system is tried and tested, and once the plants achieve full coverage, the effect will be fantastic. Visitors to the building will see the wall grow and flourish over the summer.”