A Look Back In Time:

Although some of us look at landscaping as more of a business than an art form, the truth is, landscaping has a rich and intricate history that has a lot to say about the social and cultural development of our society. In fact, some speak so highly of landscaping as a form of ancient art that they trace its roots to one of the Seven Wonders of the World – the Hanging Gardens of Babylon created in 600 BC.

While we’re busy installing landscapes that bring the best of modern technologies to our customers, like outdoor televisions and sound systems, it’s easy to forget just how much the idea of ‘landscaping’ has changed over time. Just a few decades back, landscaping was considered an absolute luxury. Only the ‘well-to-do’ could afford to decorate their outdoor space with beautiful garden beds and patios and deck out their backyard with the latest outdoor toys.

Nowadays, some form of landscaping – even if it means a few trees, a small yard, a porch or patio – is expected. That being said, while basic landscaping is the norm, most homeowners actually take it a step further. They feel it is important to enhance the curb appeal to their home and, more importantly, they enjoy having an outdoor space that is completely tailored to their own tastes.  Hence, the desire to treat the landscape as an extension of the home, complete with all the comforts and added luxuries of the inside interior. But it wasn’t always this way.

For fun, here’s a look back at the landscaping trends of earlier decades – minus today’s Japanese-inspired spa gardens, outdoor kitchens, and fire pit tables.

1920’s landscaping was all about the greenery. There was a real desire to celebrate and welcome nature in all its glory, which led homeowners to install bird feeders, bird houses and bird baths, as well as fish ponds and rock gardens… anything that would draw more nature to the home. At this time, bird watching was a shared hobby, so plants and trees with berries (such as holly, hawthorne, nandina, rugosa roses, crabapples) were popular choices.

In the 1920’s home, the front yard was considered the “public place” and was, therefore, the space that received the most attention with regards to landscaping. Most houses featured a wide front porch, often furnished with rockers and swings so that folks could comfortably enjoy the natural outdoor scenery. Most front yards didn’t have fences, and walkways and driveways were typically lined with perennials, such as Canterbury bells, irises, foxgloves, phlox, pyrethrum, coreopsis, hollyhocks, roses, columbine, delphinium, poppies, and carnations and annuals,  such as California poppies, cosmos, petunias, snapdragons, verbena, bachelor’s buttons, centaurea (sweet sultan), strawflowers, marigolds, drummond phlox, asters, etc. Shrubs were boxwood, holly, yews, abelia.

The backyard, often referred to as the “service area” was mostly reserved for drying clothes on clothes lines and storing garbage cans, although some owners designated a small area in the backyard as a “private place,” which was usually screened off or fenced in or surrounded by a border of trees or shrubs to shield residents from their neighbors’ watchful eyes and from the sun.

The decade of the Great Depression saw little advancements on the landscaping front. Most homeowners were struggling to make ends meet, which meant little to no money was left over to spend on luxuries, such as landscaping. That being said, there were still a few popular gardening trends. Large rose gardens were popular during the 1930s, as were plants such as hydrangeas, lilacs and hostas.

Consumerism is probably the most appropriate word to describe the theme of the 1950s. And just as it affected most aspects of life in the 50s, it influenced the type and style of landscaping that was popular in suburbia. Looking back now, we typically associate the 50s garden and landscape style with all things ‘tacky’ – garden gnomes, plastic pink flamingos, an overuse of evergreens as foundation plantings and an excessive amount of green lawn. In other words, a far cry from the modern, eco-friendly looks popular today!

While 1950s landscapes may conjure up images of plastic decorations and boxed hedges, the 1950s are actually defined as a decade of “modernism.” Albeit, a type of modernism far different from the so-called “modern” styles of today. With an incredible amount of soldiers returning home from the war in the 1950s, getting married and starting families, the home building industry boomed.

However, much of the homes built were on the smaller side, leaving limited space for landscaping. The result of space constrictions was “modern” landscaping – a style that was far removed from the overly-embellished look of the pre-war era.

Although modernism was the style du-jour, with the rise of consumerism and the love for all things with a price tag came the fascination with big and showy items. Garden flowers were over-sized, vibrant and colorful, for instance, large tea roses like Garden Party roses, Tiffany roses, and Chrysler Imperial roses were popular choices.  And, in line with the whole ‘keeping up with the Jones’ concept, the lawn was the symbol of suburbia dream living. The greener and bigger the lawn, the better! With the boom in consumerism and the desire to keep lawns perfectly maintained, the marketplace was flooded with lawn care products, including pesticides and chemicals for pest control. At this time, the first lawn spreader was also invented.

And there you have it! Times really have changed… next we’ll look at landscaping trends from the 60s to present date. Stay tuned! 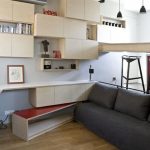 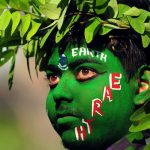