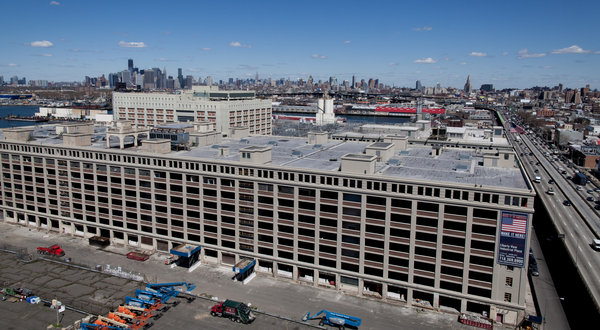 Brooklyn is fast becoming the borough of farms. On Thursday, Bright Farms, a private company that develops greenhouses, announced plans to create a sprawling greenhouse on a roof in Sunset Park that is expected to yield a million pounds of produce a year — without using any dirt.

The hydroponic greenhouse, at a former Navy warehouse that the city’s Economic Development Corporation acquired last year, will occupy up to 100,000 square feet of rooftop space. Construction is scheduled to start in the fall, with the first harvest expected next spring.

When finished, the greenhouse will rank as the largest rooftop farm in the United States — and possibly the world, Bright Farms officials say. This spring, Brooklyn Grange, another rooftop farm developer, is set to open a 45,000-square-foot commercial operation at the Brooklyn Navy Yard.

“Brooklyn was an agricultural powerhouse in the 19th century, and it has now become a local food scene second to none,” said Paul Lightfoot, the chief executive of Bright Farms. “We’re bringing a business model where food is grown and sold right in the community.”

Mr. Lightfoot said that the company was in talks with supermarket chains that would potentially commit to buying produce from the Sunset Park farm, which will include a variety of lettuces, tomatoes and herbs. “We’re looking for a long-term contract with one client who operates grocery stores,” he said.

Bright Farms owns and operates a small ground-level greenhouse, in Huntington, on Long Island, which has a relationship with a supermarket chain called Best Yet Market, with stores in the New York region, including one in Harlem. Bright Farms also plans to open three more commercial greenhouses this year in locations across the country, including Bucks County, Pa.

The Brooklyn greenhouse will rise 20 feet from the roof of an eight-story, 1.1-million-square-foot structure that was built in 1916 for the Department of the Navy. Vacant since 2000, the building, at 850 Third Avenue, is being developed by Salmar Properties, which was chosen by the city to transform the site into a light-manufacturing hub, and which bought the building from the city for $10 million.

Marty Markowitz, the borough president, said that the Bright Farms rooftop was a good fit for the site, a key component of the mayor’s plan to redevelop the Brooklyn industrial waterfront. “Here in New York, we don’t have acres and acres of unused land to grow fresh food, but Brooklyn’s got plenty of industrial buildings with unused roofs that are perfect for urban farming,” he said in a statement.

Mr. Markowitz pressed for changes to the city’s zoning laws that would make it easier for commercial farms to sprout on New York rooftops. In December, the City Planning Department issued a proposed zoning amendment that would exclude greenhouses atop commercial buildings from certain height and floor-area restrictions.

Hydroponic agriculture, in which vegetables are grown in water rather than soil, has been derided by some purists who say the resulting produce lacks taste. But the farms’ yields have increased in popularity because of advances in hydroponic technology, as well as quick travel times from farms to restaurant tables and store shelves.

Hydroponic farms are ideal for rooftops, according to Bright Farms, because they have such high yields and are less heavy than soil-based operations. They also use far less water, while diverting storm water from the sewer system, which can overflow during heavy rain. The Sunset Park greenhouse would capture an estimated 1.8 million gallons of storm water each year.

Next year, Gotham Greens plans to open three new rooftop greenhouses in Brooklyn, Queens and the Bronx; added to the 20,000-square-foot Greenpoint greenhouse, the new sites, which will be hydroponic, would raise the company’s total production to 200,000 square feet.