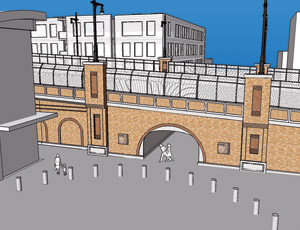 Currently, the 14th Street Viaduct stretches almost ¼ of a mile and rises over 70 ft carrying over 20,000 vehicles per day. It is also considered an iconic landmark in the Hoboken skyline and a result, the New Jersey State Historic Preservation Office required certain steps to be taken to have the replacement structure appropriately reflect the context of Hoboken’s historic district.

TranSystems led the project as well as the structural design of the proposed viaduct. Stantec’s Rochelle Park, New Jersey and New York City offices were responsible for roadway designs, lighting, traffic signal designs, and urban landscape design as well as all of the context-sensitive architectural treatments necessary for the bridge. These components include parapets, roadway and bridge lighting, fences, piers, pier caps, beams and girders, abutment faces, portals and wing walls, sidewalks and steel colors along with any public art and pedestrian amenities. KS led the topographical survey, utility relocations, and right-of-way coordination, and T.Y. Lin was responsible for the structural design of retaining walls.

Stantec’s urban designers and landscape architects also helped Hoboken and Hudson County determine the programming for the eventual use of the four-block long area underneath the viaduct. The design includes space for events such as flea markets, green markets, and community movies as well as multi-recreational space for basketball, roller and ice hockey and other urban park elements that were requested by the community including painted games, a younger child playground and a dog park.

The $50-million-plus14th Street Viaduct Replacement project is currently undergoing federal review and has not yet gone out to bid but construction is scheduled to begin this spring with completion slated for mid 2013.