Does your cell phone ever drop out in an elevator or parking garage?

That’s just one of the fixes you’ll find in a revolutionary new skyscraper being called “bright green.”

The 40-story downtown Miami building is getting attention from around the world, and the recession almost prevented it from being built.

This is a vision for a new kind of skyscraper, where environmental and technological innovations merge. And, while still only a plan, it was awarded a Platinum LEED certification from the U.S. Green Building Council, the highest green building certification possible and one of only a few in the world.

And out of the dust rose Miami’s Brickell World Plaza at 600 Brickell.

“This building is going to belong to generations that come behind us,” says Loretta Cockrum, CEO of real estate company Foram Group. “And so it was very important to leave something that was the very best that we could possibly do.”

For example, 600 Brickell will clean and re-use every drop of water it uses from rainwater and water from air conditioners will keep the landscape green, saving three million gallons per year.

Air will be cleaner inside than outside and there’s an emphasis on healthy construction materials.

The building’s hurricane strength exceeds requirements, with up windows that withstand winds up to 334 mph.

It can never lose power to utilities, including Internet, phones, water and air conditioning. The building will have its own Internet service company just for tenants.

And, very unusual: The building’s Internet connections will be hard-wired directly into Miami’s Internet hub called “the NAP,” ideal for moving massive amounts of digital information.

“By connecting the building directly to the NAP, it gives tenants a choice of over 160 carriers,” says Project Manager Paris Del Rio. “So, therefore, the connectivity is less than a millisecond away.”

It seems like they thought of everything. The signal for your cell phone or iPhone or laptops won’t quit if you’re in the elevator or parking garages. In fact, because they have a digital system in the building (not just a repeater), the signal is stronger inside than outside.

And the 30,000 square foot outdoor plaza, available to anyone and with free Wi-Fi, will be massive. A modern Rockefeller Plaza, hope the builders.

They view it as a fourth utility.

“It’s brilliant,” says Del Rio of his employer’s vision and commitment. “It really is. It’s New Age. It’s the future.”

“You can’t build it for today,” says Cockrum. “You have to dig as deep as you can to find out ‘what does my crystal ball say tomorrow’s going to be, you know, what is the world going to want tomorrow?’ I think technology and green!” 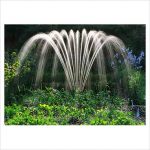