This is great news for the people of Ireland. But we need to create those jobs in the U.S. too. In Ireland, a country of four million, 10,000 “green” jobs were created in the last three months in organic farming, energy efficient construction, electric cars, and other green industries. With US GDP falling by 1.6% in the first quarter of 2009 we need more action and investment from our government and the private sector. Passing effective climate and energy legislation this year will increase both public and private investment in a clean energy economy, creating new jobs and lifting America out of the recession.

The Waxman-Markey Act recently introduced in the House could be the right start, but it currently falls far short of what we need. An analysis by the Breakthrough Institute found that of the $1 trillion in cap and trade revenue between 2012-2025, only $9 billion a year will be invested in clean technology. “This $9 billion is far less than what Obama promised ($15 billion) and far less than the $30 billion that three dozen energy scientists and experts, including several Nobel laureates, called for in a sign-on letter during the fall of 2007.”

Strong climate legislation will also encourage investment from the private sector, giving American businesses the opportunity to compete in a global economy. Currently, only 6 of the top 30 companies in solar, wind, and advanced batteries are US companies. We can do better. The recession is the perfect opportunity for forward-thinking businesses to invest and put America back on the path to prosperity. Let’s hope we can print headlines here, like the one above, very soon.
Billy Parish is co-founder and coordinator of the Energy Action Coalition. Billy has taken four years off from Yale, where he was co-chair of the Yale Student Environmental Coalition and was majoring in Ethics, Politics & Economics. Billy was a 2004 Brower Youth Award Winner, 2005 Rolling Stone “Climate Hero,” Mother Jones magazine’s 2006 “Student Activist of the Year,” and was recently named a fellow by Ashoka, the global association of the world’s leading social entrepreneurs. A co-author of the report “New Energy for Campuses,” a guide for colleges and universities on how to cost-effectively cut their greenhouse gas emissions, Billy works to train students and equip them with the tools they need to implement local climate solutions. A native of New York City, Billy now works out of the Washington D.C. office of the Energy Action Coalition. 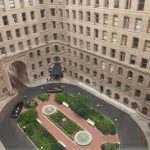