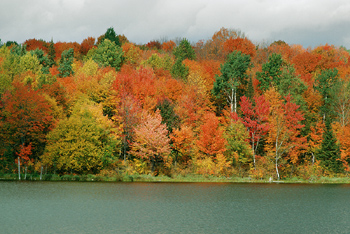 This is the first 2012 FALL COLOR REPORT for New York State. Reports are obtained from field observers and reflect expected color conditions for the coming weekend. FALL COLOR REPORTS are issued every Wednesday afternoon.

Albany, N.Y. – New York State’s colorful foliage season is officially underway as the first significant signs of spectacular fall colors are beginning to appear in the Adirondacks and Catskills regions, according to observers for the Empire State Development Division of Tourism’s I LOVE NEW YORK program.

In the Adirondacks, observers based in Old Forge, in Herkimer County, expect 15 percent color change by the weekend with muted fall colors of burgundy and yellow, along with a few splashes of red and orange. To the north, in Franklin County, foliage spotters in the Mt. Arab/Tupper Lake area expect 10-15 percent color transition with the changing soft maples adding a slight tint of muted bronze and burgundy to the fading green of summer

In the Catskills region, leaf peepers in Kingston and Saugerties, in Ulster County, expect 10-15 percent color change with average-to-bright shades of yellow and gold starting to appear against a mostly green backdrop.