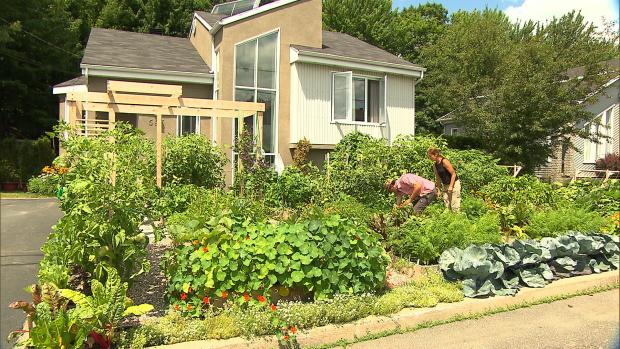 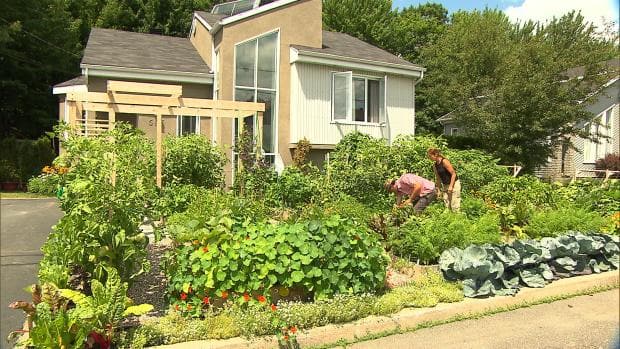 Couple faces fines for this vegetable garden on Richelieu Street in Drummondville. (CBC)

The couple is fighting to keep a vegetable garden they grow on their property in Drummondville, 100 kilometres northeast of Montreal.

This spring, Michel Beauchamp and his wife, Josée Landry, planted an elaborate vegetable garden on the front lawn of their Richelieu Street home.

They used to have flowers growing, but Beauchamp has high blood pressure and wanted to eat healthier. So they planted cucumbers, tomatoes, zucchinis, beets, onions, and brussels sprouts, among other vegetables.

Landry said the garden has had a big impact on her and her husband’s health. “Michel lost 75 lb since March, I lost 25 lb,” she said.

But the couple will face fines if they don’t rip up part of their garden in the next five days.

According to a spokesperson for Drummondville, front lawns in the couple’s St-Charles-de-Drummond neighbourhood must be 30 per cent grass.

The city has sent the couple two letters, asking them to reduce the size of their garden. It’s given the couple until Sunday to comply. After that, they could be slapped with fines of between $100 and $300 per day.

A couple is growing fresh vegetables on their front lawn. (CBC)The couple said they will not give up without a fight. “It must be a right to be able to grow our vegetables on our land. It is nonsense to ban it,” said Beauchamp.

A spokesperson for the city said neighbours have complained about the garden.

Beauchamp said no one has complained to him. He said he shares his fresh produce with his neighbours.

“They love it. Everybody is surprised by the kind of taste we can have from fresh vegetables,” he said.

The couple said they have no intention of complying with the city’s request.

This fall the city plans to make it illegal to grow vegetables on front lawns anywhere in the city.

The city held public consultations on the new rule and it said no one objected.

The new bylaw will only apply to new gardens so Beauchamp and Landry will not be affected.

Urban DIY: How to install a green roof